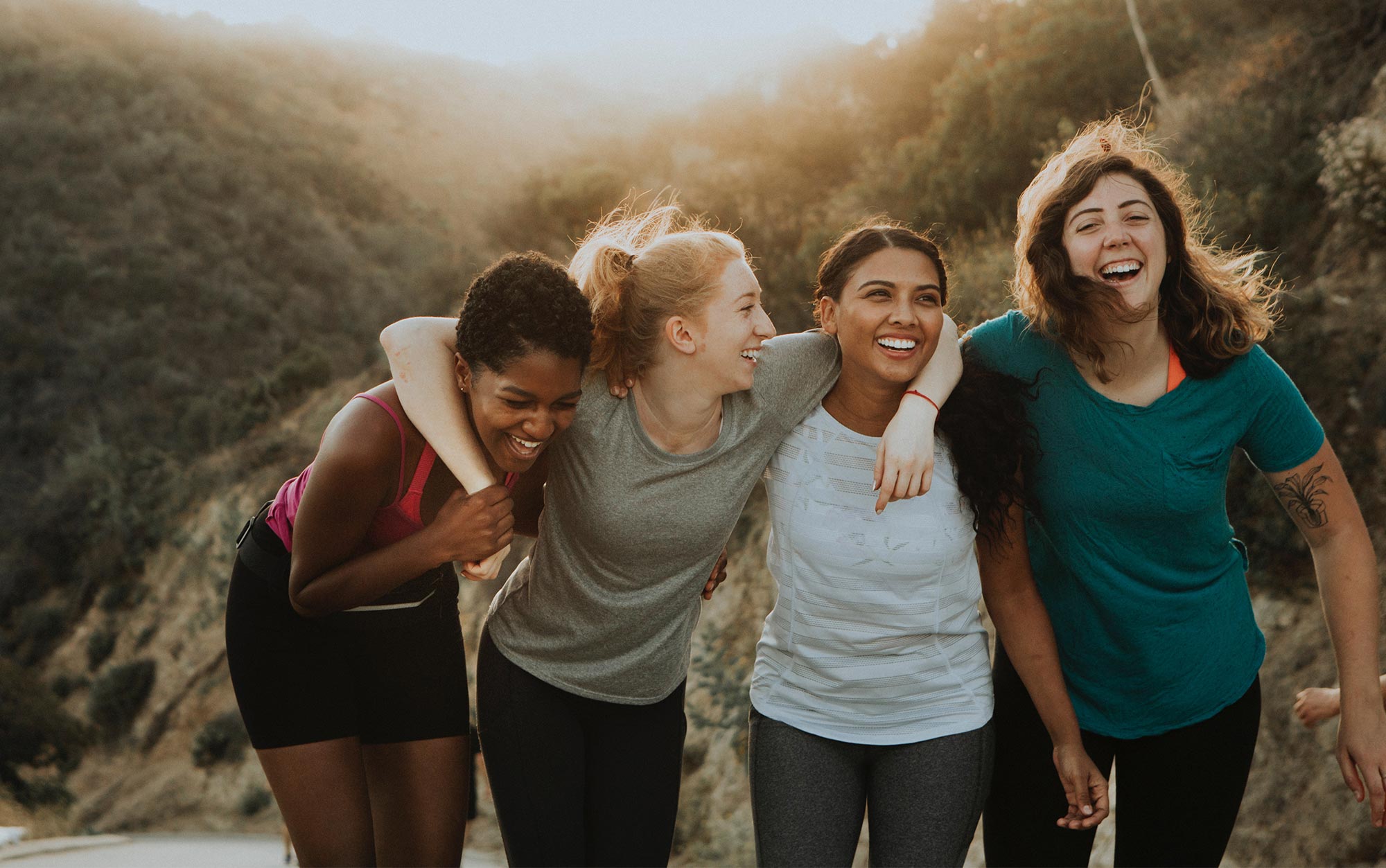 Demystifying Happiness: Why Being Happy Is the Best Way to Help Others (Part Two of a Two-Part Series on Happiness)

My husband likes to tell the story of the time we went to see the movie Bridesmaids. Five minutes into the movie, we realized the humor was not the type we enjoyed, and so we planned to exit. But before we could leave, a few people in the theatre started laughing out loud at some of the absurd gags. Soon others joined in, and the next thing we knew, we spent the rest of the movie laughing hysterically with everyone in the packed theater.

This change in attitude happened, we realized, because our feelings are influenced by the others around us.

Happiness is contagious. We all know this instinctively: When we’re around a happy person, our own spirits rise too. Just enter a room when people are having a good time, and you’ll immediately feel better.

The idea that happiness can spread from person to person is now backed by science, and by one of the most esteemed longitudinal studies of our times: the Framington Heart Study. Commissioned by Congress in 1948 to study heart disease and still going strong, this study originally included more than 5,000 subjects from the city of Framington, Massachusetts. As the decades passed, their children, grandchildren, neighbors, and other acquaintances were also included in the study. By determining long-term environmental and lifestyle effects on heart disease, it produced the groundbreaking research in the 60s that cigarette smoking, obesity, cholesterol and high blood pressure are bad for the heart, and later showed that exercise, higher levels of HDL cholesterol and normal weight can help prevent heart disease.

The researchers also dipped into a more hidden aspect of health—how we affect the health of others. They found that associating with healthy people increased a person’s own chances for stopping smoking or overcoming obesity. In other words, it found that the people we associate with affect our health, and we affect theirs.

Leapfrog to 2008, and the study spawned an entirely new revelation about how we affect the health of others, this time by researching how happiness spreads in social networks. Researchers from Harvard Medical School and the University of California, San Diego, followed 4739 people from the Framington subjects from 1983 to 2009. To measure their happiness levels, the researchers asked subjects four questions, including: “How often during the past week would you say: I enjoyed life? I felt hopeful about the future?”

In fact, having one happy friend, sibling, or neighbor who lives within a mile of you increases your state of happiness by 25%. Similar results were found when living with a happy spouse.

In other words, your happiness can help make your friends, spouse, siblings or neighbors happier, and vice versa. Even more surprising, the effect of your own happiness can reach people you don’t even know. When one person becomes happy, the social network effect can spread up to three degrees—reaching friends of friends. Being happy yourself is one of the most generous things you can do for your loved ones and your entire community.

Numerous research studies confirm that happiness has a huge impact on well-being—everything from improving heart health to promoting a healthy lifestyle to boosting immunity. It may even help you live longer. But the real question is: How do you become happy and start enjoying life in the first place?

Certainly, taking time to do the things that make you happy, such as outings with your friends or family, is a good thing. Putting a priority on exercising and eating healthy foods is going to improve your health and happiness quite a lot.

But deeper than that, increasing your resources of inner happiness will help you to weather life’s ups and downs. Then whatever happens on the outside—achievements come and go, relationships change, whatever the changes in life—you always have that core of happiness within you.

While everyone has to figure out her own path to happiness, I know for myself that practicing the Transcendental Meditation (TM) technique twice a day is the most important thing I can do to increase my own inner happiness.

For one thing, by allowing my body to receive the deep rest of TM twice a day, stress and fatigue wash away. I come to the tasks of my day in a happier, more rested frame of mind.

Letting my mind settle in meditation has a marked effect on my problem-solving ability and mental clarity as well. For me, it’s a sure-fire way to transcend the constant chatter of “to-dos” and experience a state of mind that is not only peaceful, but incredibly blissful. Through TM I have become familiar with the essence of happiness inside of me, as it exists in every person, and when I allow my mind to experience this ocean of bliss inside, I am transformed. This solid state of well-being sticks with me when I’m going through my day. I naturally feel more positive—and it’s easier to see the positive in other people and events as well.

Thousands of other women have reported the same happiness effect increasing in their lives as a result of TM practice. Research confirms that when people are experiencing less stress and a clearer mind through the practice of the Transcendental Meditation technique, they also experience increased happiness, greater self-esteem, and improved well-being—as well as other positive emotions.

I remember when I was actively teaching people to practice the TM technique, often people would say, “Colors are so much brighter now.” Or, “All those little things that used to bother me about my family don’t affect me anymore. I don’t think they’ve changed—I think it’s me who has changed.”

“TM nourishes me,” says Sara Naboulsi, a former college student at Maharishi University of Management. “It makes me more of myself. It uncovers my essence as a woman and supports me to radiate love and happiness. This daily practice has made me powerful and able to achieve my highest goals effortlessly—and by effortlessly I mean with the least time and a lot of support from the environment.”

How Inner Happiness Spreads to Others

While the Framington Heart Study discovered that happiness is a collective phenomenon, with clusters of happy people spreading happiness to others, it’s interesting to note that the research on Transcendental Meditation also describes this collective effect of positive trends spreading from one person to another. In fact, peer-reviewed research finds that TM is not only effective in increasing individual happiness, but collective happiness as well.

In 1972, it was discovered in a study of 10 US cities that the peaceful effect experienced during the practice of Transcendental Meditation spreads to the environment. Researchers found that when a small percentage of the population—just 1%—were practicing the Transcendental Meditation technique twice daily, other people in the same city who didn’t even meditate started to feel more calm, happy and peaceful, as measured by a decrease in crime rate.

Since then, in study after study, researchers have found that practicing TM creates a chain reaction of positivity, as measured by falling crime rate, less traffic fatalities, higher employment, fewer hospital admissions, more positive national mood, and an upswing in the economy.

To look at it in practical terms, as individuals we are connected to one another. Each person contributes to the collective consciousness. So if we want our community, town and nation to be happy and peaceful, more people have to feel happy and peaceful inside, and then that happiness spreads to others. Like dropping a pebble in a pond, the waves reach even the farthest shore. To paraphrase the poet John Donne, “No woman is an island.”

In physics, this phenomenon is described as a field effect of consciousness. As physicists have discovered, one of the characteristics of the unified field that underlies all matter is the quality of infinite correlation, in which every particle influences every other particle. In a similar way, if enough people start to practice TM and tap into their own experience of inner peace, it will reverberate to create peace, wellbeing and happiness in others.

So by practicing the TM technique and experiencing the core of happiness and peace inside, you’re actually contributing to the collective happiness. Attending to your own happiness ends up being the kindest thing you can do for your own health and evolution and for those around you.