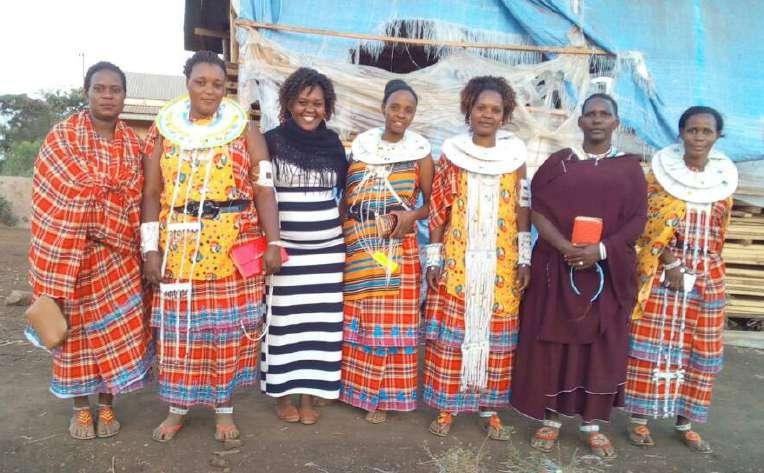 Before the onset of colonialism, the East African native population thrived as approximately 100 different sovereign and autonomous nations—with their own languages and cultures, laws and traditions. The creation of the two nations Kenya and Tanzania resulted in the permanent loss of many tribal peoples’ sovereignty and systems of government.

The Masai are the indigenous people of Tanzania and Kenya, with a current total population of about 800,000. In Tanzania, the population is estimated at around 430,000. The Maasai are semi-nomadic and pastoral, primarily living by herding cattle and goats, and the Maasai culture is renowned for its music and dance. However, the Maasai struggle to maintain an indigenous identity.

Maasai women historically were denied travel and education and had the highest rates of child marriage, illiteracy and poverty among women in Tanzania. In the last decade, however, organizations have offered training for women in land rights and entrepreneurship, provided educational and employment support, and imparted instruction in healthy lifestyle practices. Between 2011 and 2016, a partnership between UN Women and the Maasai Women’s Development Organization empowered hundreds of Maasai women to acquire land, find additional employment and diversify their economic activities to supplement their families’ income.

Fortunately, starting in 2014, one of the educational programs available to Maasai women has been the Transcendental Meditation course of instruction. To date, about 8,000 Maasai in Tanzania—mostly women—have taken the TM course.

Melanie Schaefer—a member of Partners for World Peace (PWP) and the East Africa Fund—represents the women’s wing of PWP. Below, she describes the origin, breadth and value of this Maasai initiative:

The TM instruction of African Maasai women has been a unique and inspiring story. My role began in 2013 in response to a request for financial support of two ladies from Tanzania who wished to attend the Transcendental Meditation Teacher Training Course. Having been accepted to the course and trained and certified as TM teachers, in 2014 they gained the continued sponsorship of Partners for World Peace for all their teaching activities. PWP is an international organization of independent professionals supporting TM instruction around the world. My role for Tanzania has primarily been to assist in raising and maintaining funds to support the continued teaching projects of our two lady TM teachers—Penina Mollel and Paulina Mbawala (Poline).

About the TM teachers

Penina is Maasai and grew up in a Maasai village near the Arusha urban area of northern Tanzania, which is located near Mt. Kilimanjaro and Serengeti National Park. Penina has a powerful presence and initiated the expansive instruction of the TM technique within the Maasai villages, local to Arusha and in more distant rural villages.

Poline is a native Swahili speaker originally from Dar es Salaam, a large city on the east coast of Tanzania. Her experience teaching the TM program began in Zanzibar. Within a few years it became clear that Poline’s contribution would be greatest by teaching in tandem with Penina who was deeply immersed in teaching TM to the Maasai.

These two TM teachers have worked together teaching and providing follow-up over the years to the Maasai TM groups. Recently, Poline has been carrying forward most of the teaching activity following the birth of Penina’s third child.

TM and the Maasai women

The life of the Maasai women, particularly in rural areas, could be described as indentured to the men, lacking resources, and with almost no formal education. They live a subsistence lifestyle, experiencing a nature-based spirituality. They are very friendly and very ambitious to improve their quality of life. Subsistence lifestyle carries with it many stresses.

For these women, the benefits of learning TM have been very clear. Widely accepted, the TM program has been credited among the Maasai women, many of whom have health issues and physical pain, with relief from pain and decrease of negative health symptoms. They sleep better and worry less. Anxiety is decreased. After they have been meditating for about six months, we notice the women become much more proactive about solving their personal and family problems.

The current goal is to double the number of Maasai women learning TM in 2021. The Maasai learn the TM technique at no cost to them. All teaching activity takes place through the support of donations. Partners for World Peace has structured the East Africa Fund which sponsors TM projects in Tanzania and four neighboring countries of East Africa. Without this support the Maasai would not be learning TM in large numbers.

Africa is very ripe for change. The TM teachers of East Africa are very dedicated to profound visions of uplifting the peoples of their countries through the benefits of TM. To continue teaching the Maasai at this level requires extensive support—there are never enough funds for all the projects they would like to do. You can view some of the currently supported projects on the PWP website at http://www.partnersforworldpeace.org/index.html. Donations are currently dispersed to support our programs throughout the five countries, but—due to broad interest in the Maasai—a special page is being created for that project alone, which will allow donations to be targeted to Maasai women in Tanzania. Everyone, in this way, can participate in giving greater joy of life to the Maasai women.