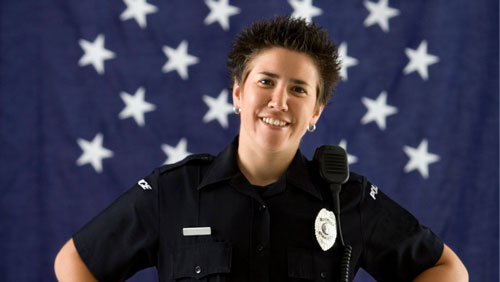 In 1905, Lola Baldwin had a job in Portland Oregon with a primary focus of social work—protecting young women working at the Lewis and Clark Centennial Exposition. In 1908, due to her success in this assignment, she was sworn in as a police officer with the power to conduct arrests.

In 1910 in Los Angeles, Alice Wells was sworn in as the USA’s first “policewoman” and five years later she founded the International Association of Policewomen.

During the depression and the war in the 1930s and 1940s, reduced competition for law enforcement jobs left the field more open to interested women. But women’s roles were not on the front lines—rather than being assigned to street and car patrol work, they were accorded desk jobs.

In the 1950s, women began to assume traditionally male-dominated roles and compete for promotion. In the 1960s, women’s crime-fighting duties started to include vice squad undercover assignments. In 1968, two female officers were given responsibility together for a patrol car. After that, the public became increasingly more accepting of women in police departments. Finally, in 1972, the government outlawed gender discrimination in public agencies, including police departments.

In the 1990s, several agencies evolved that were devoted to the advancement and rights of women in law enforcement. According to the National Center for Women and Policing, approximately 15 percent of today’s law enforcement officers are women.

It was about 25 years ago that police departments began to focus on actively recruiting women. One of the main reasons for this was that it seems that policewomen generally use less excessive force than their male counterparts. According to the website PoliceOne.com, female officers bring particular gifts and abilities to the profession including a less confrontational style than that of their male partners, a lower likelihood of use of excessive force, the ability to exercise empathy and effectively diffuse difficult situations —especially domestic calls—and a larger field of awareness in stressful situations.

In a 2014 article in the Huffington Post, retired police officer India Mitchell was quoted as saying, “Interestingly, most women are better at calming people down with verbal techniques so they don’t often have to be as physical.” Women officers are rarely involved in police shootings.

Jane Castor, a retired chief of the Tampa Police Department said, “They don’t have the physical edge in encounters with citizens so, instead, they defuse the situation from the beginning, put more effort into trying to talk their way out of the situation than to try to resort to physical force.”

Police women observe that civilians usually react differently to them because of their gender and that just the presence of a male officer can be enough to provoke someone. Beginning in the 1990s, police departments started recruiting women more aggressively as they sought to minimize the use of excessive force. There are now more than 100,000 female law enforcement officers in the United States, and many have been promoted to high ranks in Seattle, Houston, and Minneapolis, among other big cities.

As the trend of hiring more women in the nation’s police forces continues, it will be important to understand how we can protect female officers from becoming stressed and anxious. As many as 18 percent of police are suffering from Post-Traumatic Stress Disorder (PTSD) according to nationwide estimations, with police women showing higher rates. All police officers need resilience and effective ways to reduce the damaging effects of constant stress, anxiety and a physically, mentally, and emotionally demanding job.

Any individual, including law enforcement officers, continually exposed to potential or real violence, may react inappropriately This is because exposure to chronic traumatic stress decreases the brain’s impulse control and can increase impaired judgment and decision making under stress, including more aggressive tendencies in an escalating situation.

Research on post-9/11 and Hurricane Katrina events showed that emergency responders abandoned their training when they were exposed to stressful situations brought about by escalating real-time disasters. The impact of stress on judgment and decision making reduces situation awareness (the ability to pick up cues from around us so that we know what to do) reducing our ability to respond in a level-headed manner in the face of an escalating situation.

Those whose job it is to protect and serve in highly stressful settings now have new resources to draw upon so that their brains can function from a higher threshold for stress, develop greater resilience to stress during dynamic, unfolding situations, and use their cognitive resources involving judgment and decision making to respond to stressors in a more appropriate manner. Transcendental Meditation has been taught to countless police officers in the United States as an effective means of countering the effects of PTSD. But more importantly, entire programs are now in place to equip professionals in high-stress professions, including the military, so that they are more resilient in order to avoid PTSD symptoms from occurring.

Norwich University, the oldest military college in the US, has incorporated the practice of Transcendental Meditation for over 300 of its student body so that emerging leaders—both male and female—are able to proactively develop improved resilience, improved situation awareness, and better judgment and decision-making under stress.

During the TM practice, the mind is functioning in a more refined manner and the body correspondingly settles to a state of deep rest—sometimes deeper than the deepest part of deep sleep. Published research shows that during this experience of deep rest uniquely brought about by Transcendental Meditation, the brain functions with significantly greater coherence and metabolism is quieted. One feels a profound physical relaxation, and yet the mind remains restfully alert. The Transcendental Meditation program is unique among techniques of meditation, distinguished by its simple practice and profound immediate and lifelong results, including reduced stress hormones, fatigue, and physical imbalances and increased energy, stamina and resilience. Officers are less vulnerable to insomnia, depression, hypertension, and substance abuse.

As we all know, stress and fatigue slow down reaction time and reduce mind-body coordination, attention and focus, emotional stability, coping strategies and moral reasoning. Research on the TM program, published in peer-reviewed journals, shows substantial improvements in all these areas giving those in stressful professions, including law enforcement, a greater capacity to do their job well.

“Severe stress can shut down the prefrontal cortex, which is like the commander-in-chief of the brain,” said Dr. Sarina Grosswald, a former educator and researcher on PTSD and other stress-related disorders in education and the military. “TM rebalances the brain chemistry…. TM creates the brain waves associated with settledness,” said Dr. Grosswald. “As you do it over and over, these brain connections get stronger, and the connections related to trauma begin to fade away.”

With the addition of this technique to develop improved judgment and decision making capacity for all law enforcement personnel, we can envision a new paradigm to rapidly de-escalate stressful incidents. Enabling and healing strategies like TM will reduce the effects of stress on those who serve and protect—male and female—so they may better draw upon inner resources of calm to de-escalate situations and serve as true role models in our society.

Policewomen have naturally contributed to a new paradigm in law enforcement; providing officers with courses in TM would systematically develop their resilience to stress and make the vision of a new way of addressing law enforcement a reality.

Martha Batorski, EdD, is a recognized speaker on the topic of leadership development and stress. She is an adjunct professor in the MBA program at Roseman University of Health Sciences in Las Vegas, Executive Director of the TM Center for Women in Las Vegas, and a researcher on the topic of decision making under stress in leadership. She completed her doctorate from Pepperdine University in 2012 on the topic of Developing Situation Awareness Capacity to Improve Executive Judgment and Decision Making Under Stress through the introduction of the Transcendental Meditation Program at Norwich University. She regularly speaks at leadership events around the USA.